By combining proven therapeutic techniques with resort-style facilities and a team of fully qualified addiction experts, our rehab center for ketamine offers everything you need to make a positive and long-lasting change.

Contact our admissions team today to learn more about treatment options, or continue reading to discover how our ketamine recovery center can help you achieve long-term sobriety. 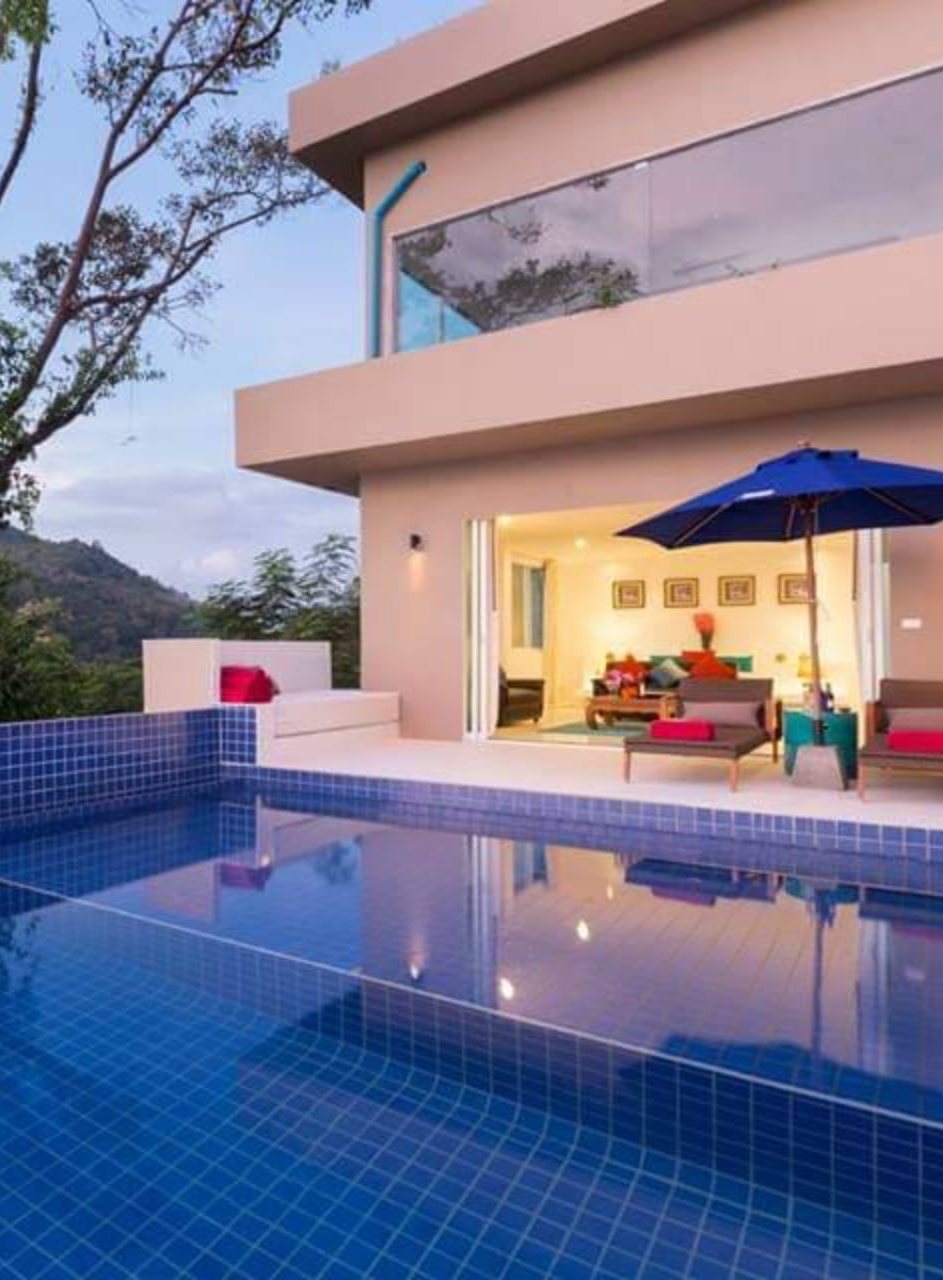 As one of Asia’s leading rehab centers for ketamine addiction, we provide highly personalized treatment plans tailored to your unique recovery goals. Our ketamine addiction treatment programs draw on a variety of evidence-based modalities, including detox and psychotherapy, as well as proven wellness practices such as mindfulness meditation, yoga, and exercise therapy.

Sustainable recovery is a core focus and throughout your ketamine rehab journey you’ll learn valuable skills that you can integrate into daily life long after you leave our rehab center for ketamine.

Your safety is our number one priority. During treatment for ketamine abuse, you’ll receive the highest level of care and attention from a team of experienced medical professionals fully committed to your recovery.

Our rehab center for ketamine provides a healing experience like no other. Nestled in the mountains of tropical Phuket, Thailand with expansive ocean views, we have created a luxurious healing sanctuary that promotes positive change.

In this peaceful environment, you’ll discover a state of the art ketamine rehab center with all the amenities you would expect to find in a five-star resort. Enjoy long nights of restful sleep in your private villa, refresh with a quick dip in your personal swimming pool, and nourish mind and body with our wholesome dining options.

Our rehab for ketamine users eliminates the triggers and stressors of daily life. Immersed in our therapeutic surroundings, you’ll feel worlds away from the social and environmental factors that fuel problematic behaviour, allowing you to fully focus your time and energy on the recovery process.

Upon your arrival at The Diamond Rehab Thailand, you’ll receive a comprehensive medical evaluation that will determine whether you will benefit from a detox. Based on these results, our clinical team may recommend starting treatment in our medically supervised ketamine detox center, where you’ll receive 24-hour care and medical support as the drug exits your body.

Our rehab for ketamine users is the perfect setting in which to reset the mind and body. In this controlled environment, our fully qualified detox team will continuously monitor your progress to ensure the detox is as safe and comfortable as possible. Once all traces of ketamine have been removed from your system, you’ll be prepared for the next stage of treatment.

We take a holistic approach to treatment that focuses not on only overcoming ketamine addiction, but also on empowering you to break free from the destructive psychological and behavioral patterns that contribute to drug abuse.

Throughout your time at our ketamine recovery center, you’ll have the opportunity to engage in a wide range of therapeutic treatments, including cognitive behavioral therapy (CBT) and our proven 12 steps program. Under the expert guidance of our Western-trained counselors, you’ll explore the inner mechanisms of ketamine addiction, develop critical tools for challenging destructive thought patterns and learn effective problem-solving techniques.

You’ll graduate from our ketamine rehab clinic with a comprehensive relapse prevention plan to help you overcome the challenges ahead and maximize your chances of a successful recovery.

"Upon your arrival at The Diamond Rehab Thailand, you’ll receive a comprehensive medical evaluation that will determine whether you will benefit from a detox. Based on these results, our clinical team may recommend starting treatment in our medically supervised ketamine detox center, where you’ll receive 24-hour care and medical support as the drug exits your body".

First discovered in 1962, ketamine hydrochloride, sometimes referred to as K, Special K, Ket, or KitKat, is a pain-relieving medication that is used as a dissociative aesthetic by both medical practitioners and veterinarians. Researchers are also investigating the possibility of using ketamine for treatment-resistant agitation and depression.

When administered in a medical setting, ketamine is generally regarded as a safe and valuable medication. However, significant risks arise when ketamine is used as a club drug or in a recreational setting.

A powerful psychotropic drug, ketamine can induce dissociative effects that alter the way a person perceives reality. It is usually sold as a fine white powder that can be snorted, swallowed, or injected, with effects typically lasting for about an hour. Over time, ketamine addicts may develop a tolerance to the drug and feel compelled to take an increasingly larger dose of ketamine, which can increase the risk of adverse side effects. Ketamine is sometimes used as a “date rape drug”, in which the drug is slipped into the victim’s drink to sedate them. Compared to the other widely-used date rape drug (GHB), ketamine abuse symptoms include hallucinations and increased blood pressure, while symptoms of GHB addiction include euphoria, slower heart rate, blackouts, and amnesia.

The long-term effects of chronic ketamine use may include:

Over time, ketamine addiction can have a significant impact on your physical and mental health. For your long-term well-being, it’s best to seek professional help as early as possible.

Ketamine abuse is insidious and it’s not always easy to know when casual recreational use has evolved into something more problematic. Recognising and acknowledging addiction to ketamine can be challenging, particularly due to the way ketamine can warp a person’s sense of reality.

Please note that this is not an exhaustive list, nor is there a “right” or “wrong” time to seek rehab for ketamine addiction. Simply put, if you want to make a change in your life, The Diamond Rehab Thailand is here to help.

Beating a ketamine addiction isn’t easy, but we’re here to show you that it is possible.

Our ketamine rehab center offers an unparalleled healing experience for people who wish to make a life-changing transformation. We combine clinical expertise with compassionate support and world-class facilities to deliver a treatment program that can help you overcome your addiction to ketamine once and for all.

The low cost of living in Thailand enables us to deliver a truly world-class treatment program at substantially cheaper rates than ketamine recovery centers in Western countries. For more information about prices, ketamine addiction treatment options, and the admissions process, please contact our ketamine rehab today.

People who are addicted to ketamine may experience a variety of physical and psychological side effects, including drug cravings, memory problems, mood swings, respiratory issues, seizures, high blood pressure, and more.

Yes. Taking high doses of ketamine can impact the respiratory system, making it harder for a person to breathe. It can also cause nausea, severe confusion, seizures, hallucinations and loss of consciousness. While fatal overdoses of ketamine are rare, they are possible. Ketamine is particularly dangerous when mixed with other drugs and alcohol, as it can heighten the effects of all substances and increase the risk of overdose.

Research shows a correlation between depressive symptoms and ketamine use frequency. However, it is unclear at this stage if this link is due to ketamine being the cause of depression, or if people with depressive tendencies are more likely to use ketamine as a form of self-medication.

What is your success rate?

Success rate is difficult to measure. It depends on the motivation of the client. Staying clean and sober in rehab is not difficult, the hard work will start once the client is leaving treatment and has to face the outside world with all its triggers. One thing we can promise is that we will give our clients all the tools to be successful once going home and provide them with the right aftercare.